ADHD vs. Autism Spectrum Condition: Spotting the Signs & How They Differ

All children have a hard time to paying attention and focusing every now and then – but if these behaviours become persistent and a child struggles to pay attention to topics they enjoy, it could signal an underlying issue like ADHD or autism spectrum condition.

Autism spectrum condition (ASC) is a series of related developmental conditions that shows up in early infancy and childhood, and its sign and symptoms can vary widely. Attention deficit hyperactivity disorder (ADHD) is a common neurodevelopment disorder that usually shows up in early childhood, often accompanied by other disorders or conditions, and can affect a child’s ability to focus.

While the two disorders are different, they can present with very similar signs and symptoms. If you think your foster child might have ASC or ADHD, you’ll want to get them diagnosed correctly so they can get the treatment they need as soon as possible.

What to look for: the signs and symptoms of autism and ADHD

Common symptoms for both include:

Children with ADHD might also have a hard time moderating their behaviour and be unaware of obvious dangers around them, while children with ASC might lack understanding of social cues, engage in repetitive behaviour and find it difficult to be in large groups or relate to the world around them.

Consider a child’s age and maturity when observing their behaviour – children in care often have behavioural difficulties or learning delays as a result of trauma and instability. You can read about what the most common form of trauma in foster children – attachment trauma – looks like here. [hyperlink to article]

How ADHD and autism are different

ADHD and ASC work differently in the brain, but both are conditions with biological causes and do not come about because of bad parenting or trauma. While there are differences between ADHD and ASC, it’s not uncommon for children to have more than one condition – and since every child is unique, their conditions will be too.

Some common differences between the two include:

Early intervention can have an enormous impact on future development and skills, and as ADHD is common in children with autism it’s important to get a proper diagnosis to figure out the best treatment.

Treatments for autism are as varied as the disorder itself, but will usually include therapies such as behavioural therapy, educational and school-based therapies, and social skills training, and can also include medication.

Treatment for ADHD often combines medication and therapy, but every child’s case is unique so it will always depend on the child’s individual needs.

Some common at-home methods of dealing with ADHD and ASC include managing diet, giving positive attention and educational support, and creating a calm and structured environment.

If you think your foster child may have ADHD or ASC, it’s important to get them seen by a GP for diagnosis and to start the process of creating a treatment plan.

Compass Fostering also gives foster carers special training and support to help create a positive environment for every foster child’s unique needs. While children with these disorders can be challenging, caring for them is extremely rewarding if you can create a safe environment that allows their personality and intelligence to flourish.

If you aren’t sure if your child may have one or more of these disorders, you can find more information and support here:

Foster children with special needs such as ADHD and autism are harder for local authorities to find homes for, but a stable and caring environment can make all the difference. Find out more about fostering special needs children by getting in touch with our friendly and knowledgeable team here at Compass Fostering.

What to do if you think your child is self-harming

It can be frightening to realise that your child, or a child in your care, might be hurting themselves. It’s important to stay calm and know that you’re not alone. Self-harm has been on the increase in recent years, and can affect both genders – in fact, the number of boys who self-harm is now higher than the number of girls.

A child might turn to self-harm for many reasons– and there’s plenty you can do to help. The most important thing to remember is that you should never tell a self-harmer to stop; they won’t be able to do so without a strong support system in place. You want to avoid putting any further guilt and shame on someone who is already struggling.

Here are the signs to look out for, and the steps to take if you think your child might be self-harming.

Self-harm is when someone intentionally hurts themselves physically. It is a way of taking emotional or ‘unreachable’ pain and making it into something real – turning it into an external thing that is tangible and controllable. It may feel like the only thing within a child’s control, so it’s important that you approach the situation calmly and carefully.

Different types of self harm

There are many types of self harm behaviour in young people. These can include:

One method that can be used to help prevent more dangerous forms of self-harm is to redirect these impulses – by snapping an elastic band against the wrist, for example, or holding ice cubes until they melt. These give similar feelings of pain or discomfort without the risk of infection or damage.

Some of the signs of self-harm are obvious – like unexplained cuts or burns – but often self-harmers will be skilled at hiding this kind of evidence. Subtler signs to watch for include:

Privacy is essential for self-harm, so withdrawal from social and family activities is a big red flag, particularly when paired with any of the behaviours listed above. 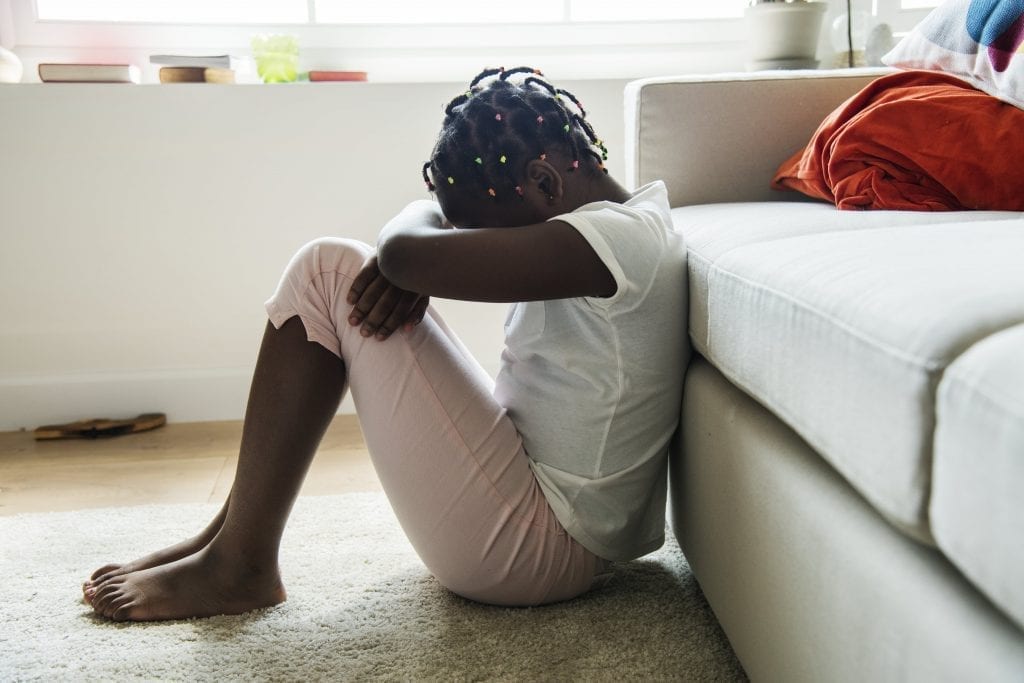 Why do people self-harm?

Because self-harm is a coping tool, there can be many contributing factors. Some of these include social problems like bullying and peer pressure, the glamorising of self-harm on social media, anxiety, depression, and overwhelming pressure to achieve.

Children in care can be at higher risk of having experienced trauma and abuse in their past, and will be less likely to have developed safe and constructive coping strategies – meaning they may be more likely to turn to self-harm.

What can parents and carers do?

Even if your foster child is not self-harming, someone they know might be – so raise it as a topic in your household so your child knows they can talk to you.

If your child tells you that a friend or schoolmate is self-harming, think carefully before informing the parent as you will be breaking the confidence your child has shown in you. Instead, try to get permission from the friend (with your child’s help, if necessary) to talk to their parents before taking action.

Where to get help

When you join the Compass Fostering family, you’re never alone. We offer extensive and ongoing training and support to help carers deal with many difficult issues that can arise when looking after a foster child. Get in touch to find out more about becoming a foster carer with Compass Fostering.

What is happening in Syria?

Well, in a nutshell, the country’s leader and army decided to declare war on his own people, so the country’s army is shelling and bombing every civilian target there is. During this, families have lost their homes, or left for safety to neighbouring countries. Many decided to take a leap of faith and migrate further looking for safety. The numbers of refugees are now in the millions so now the Syrian problem is a worldwide problem and not just a regional one.

Caring for Muslim youngsters? Are you nuts? What about ISIS…

Ok here is a bit of news; ISIS has around 20,000 members, mostly adult male fighters who are spread between Iraq and Syria. The Syrian population is 22 million, making the chances of you getting an ISIS child NIL. A refugee child is a scared individual looking for a safe place to call home.

But the child comes with no history? How do I know who am I taking?

Legitimate concern, but let’s take a look at the children we already care for now. They often come as an emergency placement, sometimes with no history or an inflated one as logs are often made by professionals trying to protect their backs. You still take that child and then problem solve as you have him or her in your household,

As carers we are always taking risks with who we take in our homes and that is a part of the job. Syrian children are no different to that, they come with the advantage that they mostly have had positive parenting before this war. They are respectful and full of gratitude – I know a few carers who will only take asylum seekers because of the level of respect they offer.

How about culture differences and diet restrictions, it’s going to be a nightmare?

Humanity is universal; Stick to this faith and you will be fine. The smile is an international language, it speaks louder than any words.

Here are a few tips that can help bridge the culture gap:

Halal Diet: No alcohol, meaning no alcohol, including cooking sauces and to any product that has alcohol as part of its manufacturing process. EXCLUDING MEDICINE. If in doubt always go vegetarian where possible, the kids will not mind, in fact they will love you for including them at meal times.

No pork, No Ham, No Bacon. This also extends to any product made from pig such as pork gelatine sweets. If you wish to educate yourself further on Halal diet you can do so, but sticking to these basic roles would be a great help.

Toilet habits may be slightly different as well. Muslims wash with water every time they use the toilet. Having a small garden water jug under the sink would make a child’s life a lot easier. These can be bought from home bargains, B&Q and even the Pound Shop. Remember they would not like to use toilet paper and there is a slight chance that the child may not be familiar with a toilet seat. In general Syria uses a different concept of toilet seats, it wouldn’t harm using sign langue to explain the flushing and the general rituals of the toilet, male to male and female to female demonstration would be more sensitive to the cultural gap. Hold the jug and tell them it is ok to use it.

Dogs and pets are fine, but if you notice that your child is praying it would help them to keep the dog out of the their room as they would need to keep that space a pet free zone.

Where can I get more help?

Check your local mosque, there is likely to be one you didn’t know about nearby. If not there are plenty of communities and literature online that can help. The council would be also be a good starting point. Any questions please don’t hesitate to ask and thank you once more for the job you are doing :).

You are amazing as they keep telling you, you really are.

Fostering Refugees in the UK

What is a Refugee?

(The 1951 United Nationals Convention Relating to the Status of Refugees).

The Facts About Refugees

A number of first born children are forced to leave their families and placed in countries which are seen to be safer. Issues would be:

If you are interested in fostering a Refugee then request a digital information pack from this page and we can get you started!

We use cookies to ensure the best experience on our website and for analytical purposes. By clicking "accept", you agree to us using these cookies.Accept